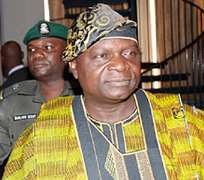 SAN FRANCISCO, February 12, (THEWILL) - Indications of a new twist in the lingering crisis within the ruling Peoples Democratic Party (PDP) emerged, Tuesday, as the party threw caution to the winds and openly opposed the application by sacked National Secretary of the party, Prince Olagunsoye Oyinlola, to stop the execution of the judgment which removed him from office.

Counsel to the party, Joe Kyari Gadzama, SAN, had stormed the Federal High Court sitting in Abuja presided over by Justice Abdul Kafarati expressing opposition to the application brought by Oyinlola seeking a stay of the earlier judgement of the court.

Oyinlola, through his counsel, had prayed the court for a stay of execution of its January 11 judgement removing him from office as the National Secretary of the party, pending the hearing and determination of an appeal before the Court of Appeal, Abuja.

Oyinlola had argued that the court did not make any order for the benefit of the PDP and so it could not have proceeded to enforce same.

According to him, it is not in the place of any of the parties to claim that the order has been executed and so there is nothing to stay.

But in a counter-affidavit brought by Gadzama,, he informed the court that the party opposed the application for stay of execution both factually and legally.

Gadzama argued that the executory order of the court was made on January 11 and the applicant slept and woke up on January 21, almost two weeks later.

"There is nothing to stay and this application ought not to stay in this court," Gadzama noted

He therefore urged the court to dismiss the application saying, since they had slept and just woken up, it pre- supposed that if they got an order of stay, they would go and sleep again.

Counsel to the Ogun State PDP who is the plaintiff in the case, A. Oluyede, prayed the court to dismiss Oyinlola's motion with cost.

Oluyede submitted that, it was not in controversy that the applicant was no longer the National Secretary of the PDP adding that he (Oyinlola) was a contemptnor and until the court determined the pending application of contempt, he could not be heard.

In its own argument, the Independent National Electoral Commission, (INEC), urged the court to determine the pending application on its merit.

Counsel to the commission, W. T. LorsheN urged the court to exercise discretion on the merit because, as an independent body, it would obey the decision of the court.

However, Justice Kafarati adjourned ruling on the matter till March 21..