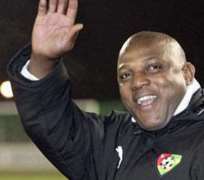 We gathered recently that Stephen Keshi has just announced to have handed over his resignation letter after the game , he said the minister was interfering in his job.

"Firstly, we must indeed say a big thanks to Keshi, the Super Eagles and the entire contigents that went to South Africa to represent the nation, it's a noble cause, we dit it after 19 years. Though, Keshi is the Chief Coach, notwithstanding, the Minister of Sports his his boss and he must be submissive," one of the aides of the Minister told Nollywoodgists.com

We shall give you full details after this timeout!

Dbanj To Perform At The Closing Of AFCON 2013