PDP TO FLAG-OFF CAMPAIGNS IN FCT 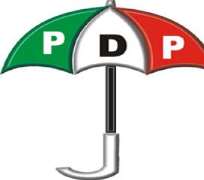 The FCT Chairman of the party, Alhaji Yahaya Suleiman, disclosed this to newsmen shortly after a three hour closed door meeting with the Senator representing the FCT, Senator Philip Tanimu Aduda, along with all the chairmanship candidates as well as party chairmen across the six area councils at the party's secretariat in Abuja.

He said the flag-off campaign which will commence at Kuje and Gwagwalada area councils where the party's flag will be handed over to all the chairmanship candidates that emerged victorious during the party's primaries held on December 29, 2012.

Sulieman said the flag-off campaign for the chairmanship candidates for Kwali, Abaji, Bwari and Abuja Municipal Area Council (AMAC) will now follow subsequently, saying the entire members of the party want to enter into a social agreement with the electorate in the FCT.

According to him, the party had since put in place a standing reconciliation committee headed by Mr. John Durumi, which he said, had gone round the six area councils to reconcile those who have misconception about the party's primaries.

'And there is also a standing committee for discipline which will sanction any member that errs against the party because the PDP is a party for the masses that is guided by its constitution,' he said.

The PDP chairman urged all members and supporters of the part in the FCT to eschew bitterness and conduct themselves in an orderly manner during the campaign in order to set a pace for other parties.

Also speaking, Aduda called on residents of the FCT to come out en-mass to cast their votes for the party during the election, saying the party has a lot to offer to the entire people of the FCT.

It was gathered that among those who will be presented with the party's flag at the campaign flag- off include, chairmanship candidates of Abaji, Yahaya Garba, Kwali, Ibrahim Daniel, Kuje, Shaban Ishaku Tete, Gwagwalada, Adamu Mustapha, as well as the incumbent chairman of Bwari and AMAC, Peter Yohana and Micah Jiba, who are re-contesting who a second term.