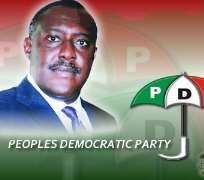 SAN FRANCISCO, February 03, (THEWILL) – Nigerians have started congratulating the Super Eagles on their victory over the Elephants of Cote d'Ivoire in the ongoing Nations Cup football tournament in South Africa as the Peoples Democratic Party (PDP) has described the Super Eagles' victory as a good omen and a sign that the nation will soon surmount all its challenges under the present dispensation.

In a statement signed by the PDP National Publicity Secretary, Chief Olisa Metuh, Sunday evening, the ruling party said it was overjoyed that the players did not let Nigerians down as it maintained that the victory was an indication that Nigeria is already coming out of the woods in all spheres of life.

"The victory of the Super Eagles is a good omen. It is a sign of good things to come. The PDP sees it as a sign of a new beginning. It shows that we, as a nation can surmount all our problems. It is an indication that there is nothing impossible and that collectively we will overcome all the challenges we are facing as a nation. We will surmount all of them the way we surmounted the Elephants", he said.

The statement came as the Speaker of the House of Representatives, Hon. Aminu Waziri Tambuwal, also sent in his congratulatory message.

In a statement signed by his Special Adviser on Media and Public Affairs, Malam Imam Imam, Tambuwal said the fighting spirit shown by the Eagles will no doubt lead the team to lift the trophy.

He said the victory is all the more sweet because the players not only won the match, they did so convincingly by controlling the play and neutralising the so-called big name players in the Ivorean team.

Tambuwal said the unity of purpose shown by the team only reaffirmed the notion that when all hands are on deck, achieving a common objective will be easier than expected.

While congratulating the nation for the achievement, he urged Nigerians to intensify prayers for the team and their handlers until the trophy is brought to Nigeria.

PDP said the victory over the Elephants, who had in the past stopped the Eagles in the tournament was an indication that nothing is impossible for Nigeria and that the doors have been opened for the nation to achieve other goals.

Stating that the victory did not come to it as a surprise, the party called on Nigerians to always believe in the potentials of the nation and urged pessimists to turn a new leaf especially as it has become clear that the country has already started experiencing a new dawn .

The PDP therefore reiterated that as a party that has the interest of the nation at heart, it had joined other well meaning Nigerians in praying for the Eagles, saying the victory showed that God answers prayers.

It however charged the team not to relax at this moment but to increase their zeal as they meet their next opponent in the semi final stage.

The party told the players not to forget that millions of Nigerians are now counting on them to bring the cup home at the end of the tournament, adding that they cannot afford to fail the nation at this critical time.