FG Seeks Stay Of Execution Of Nigerians In Indonesian Prisons 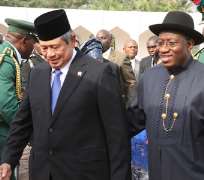 SAN FRANCISCO, February 02, (THEWILL) – The Federal Government, Saturday, asked Indonesia to stay execution of those on death row for drug-related offences and financial crimes in that country’s prisons.

President Goodluck Jonathan made plea in Abuja when he hosted the Indonesian President, Susilo Bambang Yudhoyon, and his team to a bilateral talks.

A Memorandum of Understanding (MoU) that will facilitate the release and return of Nigerians on death row languishing in Indonesian prisons was part of Saturday's one day State visit to the country by the Indonesian president.

Yudhoyono, who has been on tour of developing nations in his capacity as co-chairman of the United Nations High Level Panel (HLP) on the Post Millennium Development Goals (MDGs) came along with his wife, Ani, and about 100 Indonesian businessmen.

The two other co-chairmen of the HLP are Liberia's President Ellen Johnson Sirleaf and British Prime Minister, David Cameron.

A 27-point joint communiqué issued at the end of the bilateral talks noted with delight that Nigeria and Indonesia are committed to strengthening their relations.

Jonathan and his guest expressed satisfaction with the steady growth of friendly relations in the past 48 years and a commitment to expand in various fields.

They also welcomed the signing of an MoU to combat drug abuse and illicit trafficking in narcotics. President Jonathan was said to have told the Indonesian president to soft pedal on the execution of Nigerians on death row in Indonesia pending their legal mutual agreements.

Some of the areas of cooperation include agriculture, security, peace keeping, as well as trade and investments.

On his part, the Indonesian president promised to cooperate with Nigeria in agriculture, trade and investment.

Both presidents also agreed that their countries would share best practices and capacity building in the achievements of the millennium development goals.

Speaking with State House correspondents after the meeting, Jonathan disclosed that they pledged to strengthen bilateral ties with a view to exploring the vast potentials they both have to fast track further development.

Other aspects of the MoU were issues of counter terrorism and drug trafficking, the dual problems of which the countries are trying hard to overcome.Issues of the conflicts in Guinea-Bissau, Mali, and the Sahel, and the correlation between these and the war on terror, also featured in the parley between the two leaders.

They directed relevant agencies of both countries to appraise the prevailing counter-terrorism strategy they are currently operating so as to key in on areas of bilateral collaboration would be appropriately developed.

It was also agreed that both countries will begin exchange of defense personnel with a view to boosting cooperation in these areas.

On matters bordering on global politics, they focused on the re-election of Nigeria’s Kanayo Felix Nwanze as the President of the International Fund for Agricultural Development, IFAD, and the enhancement of the chances of Indonesia ‘s Mari Eika Pangestu for the post of Director General of the World Trade Organization, WTO, for the period of 2013-2017.