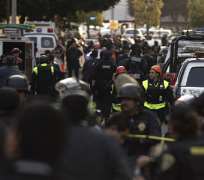 Dozens of people were trapped in the building after the explosion, Foro TV reported. It was unclear how many of them had been pulled to safety, or whether anyone remained stuck inside late Thursday, Interior Minister Miguel Angel Osorio Chong told reporters.

More than five hours after the blast, rescuers had pulled at least one survivor from the rubble, Mexico's president said in a Twitter post.

Crews were still searching Thursday night for people who could be trapped in the Pemex office complex, which includes one of the city's tallest skyscrapers.

The explosion occurred in a basement and collapsed two floors of a building adjacent to the well-known tower, said Carlos Javier Rodriguez Jurado, one of the first paramedics to arrive at the scene.

The explosion tore through the building "from the inside out," he said, and rescuers found many people trapped. Six hours after the explosion, Rodriguez said people were likely still stuck in the rubble.

It was unclear what caused the blast, and Mexico's attorney general's office is investigating, Pemex said in a statement.

A large plume of smoke rose near the building after the explosion around 4 p.m. Thursday, and emergency crews swarmed the scene.

"People were screaming. ... You could see pieces of the wall falling to the ground," said Joaquin Borrell Valenzuela, an attorney for the Pemex comptroller's office, who was in a courtyard outside the building at the time of the blast.

Paramedics quickly arrived and started pulling bodies from the rubble.

"Entering the building, we smelled a strong odor of gas," said Christopher Rangel, a paramedic and firefighter.

Outside the building, frantic family members searched for loved ones, and shaken witnesses described the explosion.

Mario Guzman said he was on the 10th floor of the tower when he felt "a very strong blow."

"We felt like the whole building was going to collapse," he told CNNMexico.

Images from the scene showed emergency rescue teams carrying people on stretchers. Authorities said helicopters carried some of the wounded to hospitals.

At least 14 people were hospitalized with injuries, and two of them were in serious condition, the state-run Notimex news agency reported.

Pena Nieto cautioned against speculating over what caused the blast, and said authorities would be closely investigating.

Thousands of people work at the Pemex headquarters, which includes a 54-story building that is nearly 700 feet tall.

The explosion occurred in an annex building just to the east of the tower, Foreign Minister Jose Antonio Meade said.

Officials evacuated the complex and operations will cease there until further notice, the company said.

The state oil company's director, who was on a business trip in South Korea this week, said in a Twitter post that he would return to Mexico immediately.

"We will get to the bottom of the causes in close coordination with the authorities," Pemex Director General Emilio Lozoya Austin said. "At this time, attending to the injured is the priority."

As they combed through the rubble, a Pemex executive's cell phone rang, Rangel said.

A man on the other end of the line said he was still trapped, and started to describe his location to rescuers.

"Unfortunately, we lost communication with him," Rangel said.

When they called back, his phone didn't ring.
CNN