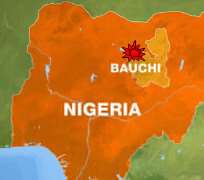 SAN FRANCISCO, February 01, (THEWILL) – There was pandemonium in the Zango area of Bauchi metropolis in the Bauchi Local Government area of Bauchi State, Friday, as unknown gunmen stormed the area, killing two persons and injuring one other.


The Public Relations Officer of the Bauchi State Police Command, ASP Hassan Mohammed Auyo, who confirmed the incident, said the gunmen who operated on a motorcycle attacked a shop owner and killed him instantly while they also shot another person sitting with the shop owner in the stomach.


Auyo said the injured victim and the corpse of the shop owner had been taken to the Abubakar Tafawa Balewa University Teaching Hospital where the injured man eventually died.


Though a top security source in Bauchi said from the way the gunmen operated, it might be a robbery case , Auyo disclosed that the Police had commenced investigation into the incident.

He assured the suspects would soon be brought to book as he advised residents of the town to be security-conscious and report any suspicious character to the police for necessary action.