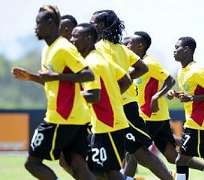 Each Ghana player received $35 000 after qualifying for the 2013 Africa Cup of Nations quarterfinals, officials said on Tuesday.

"Had they failed to qualify for the quarterfinals, they would not have received anything," he added.

The Black Stars face Cape Verde on Saturday in the first quarterfinal at the Nelson Mandela Bay Stadium in this Indian Ocean city.