Azarenka And Li Through To Final 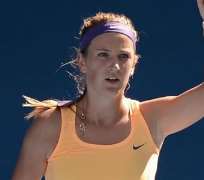 Azarenka left the court for almost 10 minutes to have medical treatment on what appeared to be a neck injury after Stephens had saved five match points.

But the Belarusian, who had hurt her left ankle earlier in the set, broke the American in the next game to win.

The performance of Azarenka was the main talking point on a day when the on-court temperature soared past 40C.

The top seed secured the first set in 28 minutes against the teenage American, who had beatenan injury-hit Serena Williams on Wednesday.

But she then became increasingly frustrated as the second set went on.

She hurt her ankle in the third game of the second set, allowing Stephens the chance to break back, but the champion seemed to have overcome the injury within a few games.

However, she made more and more mistakes and struggled to maintain her composure, especially after Stephens saved five match points on the Belarusian's serve.

Azarenka then called for the trainer and went off for treatment, only to come back and break the American straight away to clinch her place in Saturday's final.

Second seed Sharapova had only dropped nine games in her previous five matches but struggled with her serve throughout her semi-final against 2011 runner-up Li.

Li, 30, broke Sharapova three times to take the opening set, including in the first game, and then broke again in the fifth game of the second.

The sixth seed, the first Asian player to win a Grand Slam crown, maintained her form to seal a deserved victory in only 93 minutes.

"Every time I'm back in Australia, I always feel something here," said the 2011 French Open winner. "I always play well here. Everyone can be nervous in a final, so I have to enjoy it. I'm looking forward to it."

Li, who appointed Argentine Carlos Rodriguez as her new coach last August, said her success was down to projecting a calmer face on court.

"Maybe before I was angry or something. Start of this year, I try to cool down on the court.," she said. "You don't have to show opponent what are you thinking. A little bit like Hollywood, but not real."

Sharapova, a four-time Grand Slam winner, hit six double faults and made 32 errors in a poor display but was quick to praise Li.

"I think she played a really great match," said the 25-year-old. "She was certainly much more aggressive than I was and dictating the play.

"I was always on the defence. When I had my opportunities and break points in games that went to deuce, I don't think any of them really went my way today."