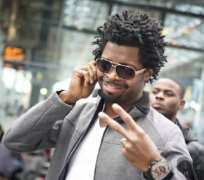 If you were offered N50 million in exchange for your girlfriend, what will you do?

Ace comedian, Bright Okpocha, popularly known as Basketmouth accompanied by Bovi Ugboma in a comic video traced his girlfriend to the house of a rich politician who offered him money in exchange for his babe.

Watch the hilarious video below: