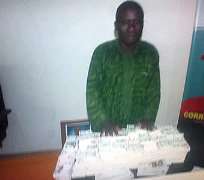 The charge was read to the accused in English and eventually translated into Hausa, his preferred language. He pleaded not guilty.

One of the charge reads: “that you Mohammed Sani on or about 29th day of November 2012, in Kano within the jurisdiction of the Federal High Court in Kano, had in your possession without lawful authority Eight Thousand Five Hundred and Four (8504) pieces of counterfeit $100USD (United States Dollars) Bills each with serial number HJ61755200A knowing same to be counterfeit and thereby committed an offence contrary to and punishable under section 5(1)(b) of the Counterfeit Currency (Special Provisions) Act, Cap. 35, Laws of the Federation of Nigeria 2004”.

The case has been adjourned to February 25, 2013 for hearing, while the accused is remanded in prison custody.