Give us Second Niger Bridge And Security In the South East 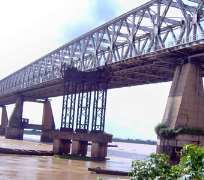 For the past 15 years or so Commuters passing through the famous Niger Bridge, one of the longest bridge in Nigeria especially during the festive periods have suffered untold hardships and excruciating pains. In these painful fifteen years, it has been difficult if not impossible to quantify the losses in both human and material resources.

What the commuters suffered in 15 years put together cannot be equal to what we saw from Mid December 2012 to Mid January 2013. Those coming from Lagos were stuck in Asaba and those coming from Aba, Owerri, Enugu, etc were held in Onitsha. My Children who left Nnewi for Lagos on Jan 7 2013 by 6:00 am could not access the Niger Bridge until about 11 am.

Nnewi to Onitsha is about 15 kilometres.
Assurances and pronouncements have been made by the powers that be in the past 10 years and all to no avail. It has been all noise and no substance.

Nigerian leaders especially at the federal level have no conscience. I suggest that the South East Governors should take their destinies in their hands. South East Governors have the capacity and the resources to build the second Nigeria Bridge federal or no federal government intervention or support.

Another very big problem facing the South East is security. From 20th December 2012 to January 15 2013 when I left Nnewi for Lagos I noticed that every prominent person goes about with three or four policemen. Judging from number of security personnel I saw in the South East I kept on wondering if we still have policemen left to protect other sections of the country.

Again, let it be known that the South East governments can effectively handle all security issues in their domain to save the economy from collapsing. The governors must reverse this frightening trend of prominent Igbos travelling to other lands during festivities instead of returning home. Travelling home during Christmas, Easter and New Yam festival is a culture in Igbo land and the governors must know this.

Good governance demands that the governors must know this and consequently create an enabling environment for their citizens. Anything short of this is a failure of leadership. Let the South East Governors organize a summit on security. Let the governors pull resources together to protect their citizens. Securing lives and properties should be the number one priority if they must succeed.

The primitive idea of going to Abuja for every single problem must cease to exist. South East Governors can build the Second Niger Bridge and make investment in security to secure the economy of their zone.