Another Cash Courier Convicted Over $130,000 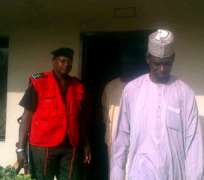 SAN FRANCISCO, January 16, (THEWILL) - A Federal High Court sitting in Kano has convicted a currency courier, Bashir Abdu who was prosecuted by the Economic and Financial Crimes Commission, EFCC, for not declaring the $130,000 found on him at the Mallam Aminu Kano International Airport on his way to the United Arab Emirates.

Justice Fatu Riman today ordered the accused, who pleaded guilty to the one count charge of money laundering preferred against him by the EFCC, to forfeit 50 percent of the undeclared sum of $130,000 (one hundred and thirty thousand United States Dollars).

This is the second person that will be convicted for currency under declaration in two days in Kano.

On Tuesday January 15, one Umar Musa Kibiya who was also prosecuted by the EFCC was convicted for failing to declare the $80,000 (eighty thousand United States Dollars) found on him money on him to Customs at the MallamAminuKanoInternationalAirport.