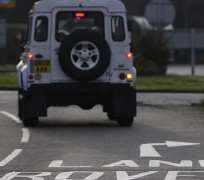 Premium carmaker Jaguar Land Rover plans to create 800 new jobs at its Solihull factory in central England due to demand in China, Russia and the United States, a person familiar with the matter said on Sunday.

JLR, owned by India's Tata Motors (TAMO.NS), said earlier this month that its outlook for 2013 was positive after UK vehicle sales rose almost 20 percent in 2012.

The source said confirmation of the new jobs could come later on Sunday. Last week, Japanese carmaker Honda (7267.T) cut around 800 jobs at its plant near Swindon due to falling demand for its vehicles across mainland Europe.