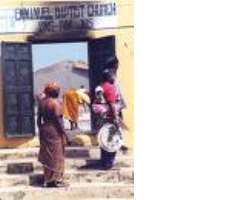 An annual list of countries that names the worst violators of religious freedom expanded to include two new countries – Iraq and Nigeria – announced a U.S. government body over the weekend.

This year, the U.S. Commission on International Religious Freedom (USCIRF) recommended to the Obama administration a total of 13 countries that it should designate as “countries of particular concern” (CPCs).


Iraq was added in December because of the ongoing, severe abuses against minorities and the government's tolerance of the violence, particularly against Iraq's “smallest and most vulnerable” religious minorities, including Chaldo Assyrians and other Christian groups.


Nigeria, meanwhile, which has been on the commission's watch list for seven years, was recommended to

toleration of “systematic, ongoing, and egregious violations of religious freedom and beliefs.”


Thousands of people have been killed, displaced or somehow affected by ongoing sectarian violence in

churches and mosques to go with impunity.

Though noteworthy, the addition of Iraq and Nigeria to USCIRF's annual report was not what drew the

most attention during the press conference announcing this year's list. Instead, the commission highlighted the dangerous situation in Pakistan, where Taliban extremists are strengthening and

the commission to renew its call for the State Department to designate Pakistan as a CPC.


“We are releasing this report at a critical time,” said Felice D. Gaer, chair of USCIRF, at the opening of the press conference on Friday. “With Taliban associated extremists advancing to within 60 miles of Pakistani capital Islamabad, the relevance of our work is crystal clear.


USCIRF is a bipartisan federal government commission that is in charge of advising the U.S. Administration and Congress on policies designed to protect and promote religious freedom in the

world. It was created by the International Religious Freedom Act of 1998 (IRFA).


Included in this year's report, which covers the period from May 2008 through April, are: Burma, North

religious freedom in light of the massive anti-Christian campaign affecting tens of thousands of people in its Orissa state. The group plans to release the chapter on India this summer after the trip.