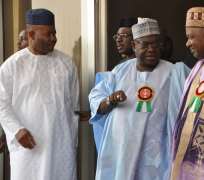 SAINT MUGAGA, THEWILL.ABUJA, January 10, (THEWILL) - A vote of confidence has been passed on the leadership style of the national chairman of the ruling People’s Democratic Party (PDP), Alhaji Bamanga Tukur.

Passing the confidence vote , Thursday, were the 17 state governors of the party who met with President Goodluck Jonathan, Vice President Namadi Sambo and Secretary to the Government of the Federation, Senator Anyin Pius Anyim.

The four-hour meeting, which came a day after the president met with members of the National Working Committee (NWC) of the party, was convened to reconcile the governors with the party's national chairman on their differences over his decision to sack the executive council of the party in Adamawa State.

Governor Godswill Akpabio of Akwa Ibom, who spoke with State House correspondents after the meeting, noted that though there are disputes threatening to tear the party apart, the party has an in-built mechanism to overcome the obstacles it is currently facing.

“You know the PDP is a very large party. The party may have its own internal challenges. Of course, we have our own modus operandi for resolving all these issues,” Akpabio said.

According to the Akwa Ibom governor, “various committees have been set up for the Board of Trustees election from the National Working Committee," adding that the end of the day," in the next one week, all those issues will be a thing of the past.”

Akpabio stated further : "The governors are happy with the party and we are sure that under the leadership of President Goodluck Jonathan, all the issues pertaining to the party will be resolved amicably and the party will come out stronger.

"There is nothing like the PDP governors not being happy. We identify with the party, We have confidence in the party. And all the internal wrangling you are hearing, those things are normal in any democracy. These are as a result of the fact that the PDP is a very large party, the largest in the whole of Africa.

”All these internal issues will soon be resolved. Mr. President, who is the leader of the party, has taken the right step. He has set up the right committees and you are aware that even in the state of Adamawa, we have the Governor Sule Lamido Committee that will soon bring a report which will bring the Adamawa crisis to an end.”

Akpabio disclosed that the peace meeting was initiated by President Jonathan to enable him discuss issues of governance and party matters with the governors, stressing that rising from this second leg of the meeting, the meeting will be institutionalised to be a bi-monthly affair.

He expressed confidence that the meeting and subsequent ones will also focus on looking at the yearnings and aspirations of Nigerians who gave the ruling party its mandate.

“I can assure you that from the discussion we had, PDP will remain the party to beat because Nigerians are looking for good governance.

“Mr. President invited all the PDP Governors to have a parley with him. I think this is the second of that type of meeting. We agree we should meet every two months to look at issues as leaders of the country. And particularly since the PDP is the ruling party.

“We must look at all areas of governance and look at areas that require improvement. It's a kind of peer review mechanism where the PDP states comes together to look not just at governance at the state level but also at the party itself at the national level.

"So we look at things that can strengthen the party and also look at what Nigerians want, while we are delivering dividends of democracy which other areas Nigerians are clamouring for improvement.

"And I think this is good for the governance of the country. We must commend Mr. President for this initiative.

"Meeting the president and the vice president will augur well for the governance of this country. We will deliver more dividends to our people. Nigerians love the PDP and of course we want to give Nigerians the best."