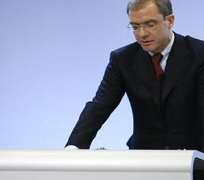 UBS was fined a record $1.5 billion last month for manipulating Libor interest rates, the latest in a string of scandals including a $2.3 billion rogue-trading loss and a tax avoidance row with the United States that have shredded the group's once venerable reputation.

Four former UBS executives, including ex-chief executive Marcel Rohner, told a British parliamentary panel investigating banking standards that the first they heard of the bank's involvement in rigging Libor was from press reports in 2011.

All of them had been in charge of the investment banking unit for part of the period when the manipulation, stretching back to 2005, occurred.

"The level of ignorance seems staggering to the point of incredulity," said Andrew Tyrie, the head of the Parliamentary Commission on Banking Standards (PCBS), which was set up in the aftermath of the Libor scandal.

Rohner said he was "shocked" and "ashamed" when he read about the rigging, but he said during his period as CEO he was trying to save the bank from collapse and was unaware of the misconduct. He denied his leadership had been negligent.

"The times I was leading this institution were so extreme I was fighting permanently for survival," said the Swiss national. "I did the best I could."

Rohner was CEO for 20 turbulent months between 2007 and 2009, when UBS repeatedly had to tap shareholders for cash as it was forced to write down more than $50 billion worth of mortgages during the global financial crisis.

The 48-year old, who at times appeared puzzled by the harsh questioning from lawmakers, has not gone back to full-time work since.

On Wednesday, UBS's new investment banking chief outlined how the bank was trying to claw back its reputation. The bank is axing 10,000 jobs and closing much of its fixed-income arm to focus on its flagship private banking business.

EPIC SCALE
Investigations by British, Swiss and U.S. regulators revealed interest rate manipulation on what the U.S. authorities called an "epic" scale. UBS brokers and managers conspired with brokers to rig the rates to make money and openly boasted about what they were doing in emails and electronic chat rooms. Five internal audits failed to detect what was going on.

The British financial watchdog said interest rate rigging was so widespread at UBS that every submission it made over a six-year period from 2005 to 2010 inclusive was suspect.

Libor, the London interbank offered rate, is used as a benchmark for pricing trillions of dollars of loans. Even small inaccuracies in the rate affect investment returns and borrowing costs meaning that UBS and other banks implicated in the rigging scandal are at risk from civil lawsuits.

Under persistent questioning, Jerker Johansson, who headed the investment bank for just over a year from 2008, admitted that management had been negligent not to detect the misconduct.

He said the manipulation was tantamount to stealing.

More than a dozen banks are under investigation in the Libor probe and further settlements with regulators are expected this year. Barclays (BARC.L) paid a fine of $453 million for its role in the interest rate manipulation last year.

The PCBS, a cross-party panel of lawmakers, is expected to make recommendations on reforming the banking sector to government and the industry before the end of March. The committee cannot compel the banks or the government to act but its views are influential.

Thomson Reuters, parent company of Reuters, has been calculating and distributing Libor rates for Libor's sponsor, the British Bankers' Association, since 2005.