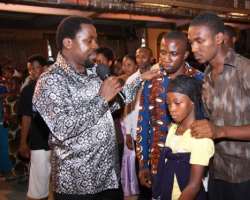 “She is the one that killed her mother! She caused my father a serious accident – they say she even attacks people in the dream. If she comes to church, they will send her away. The pastor called me and said if I keep her with me, she will destroy my family. She was born with witchcraft power – they said she cannot be delivered, that we should drive her out. If she's going to die, let her die. It is better she dies before killing us…”

The accusations levelled against the meek 10 year old were both fierce and frequent. Labelled a symbol of satan, a societal scourge, an instigator of destruction and initiator of woe, her dark eyes filled with pain beyond her years. Despite her tender age, Favour Onyenwaku had been communally branded a witch. Before finally throwing her out of the house, Edward Jonathan and Amadi Kelechi, Favour's uncle and cousin respectively, decided to bring the small girl from Anambra State to the famous Synagogue Church Of All Nations in Lagos, Nigeria on a desperate mission to ascertain the truth from God.

Stigmatised from childhood as a witch and menace, Favour was brought up in the house of her auntie, her biological mother dying tragically seven days after birth. As she grew in stature, so did the stigma - and before long, the loathsome rumour had spread its tentacles throughout the neighbourhood, every ensuing mishap attracting her name as the prime suspect. The brazen confirmation of her witchcraft by various pastors and spiritualists further fuelled the revulsion and isolation to the point that Favour was thrown out of school and chased out of church, deserted by friends and denied by family. Uncommonly intelligent, Favour managed to return to school a week before her exams, achieving a remarkable 1st place position with a double promotion. The joy was short-lived as the community soon attributed her outstanding success to satanic sources. There were many attempted deliverances, yet with seemingly futile results, the pastors involved explaining that her case was beyond spiritual intervention since the evil powers were supposedly inborn. It seemed the only availing option was to send the little girl out to the face the perils of life without protection or provision.

Favour stood silently before the vast congregation of The Synagogue, Church Of All Nations on Friday 28th August, T.B. Joshua looking keenly at her. It was The SCOAN monthly healing service, with over 20 000 watching the drama unfold with rapt attention. “You heard what they are saying? Are you a witch?” he asked softly. Favour looked up, emotionless. “I am not a witch.” The crowd gasped. “I did not kill my mother or cause anybody accident. I am a child of God!” She was bold and convincing, speaking with clarity and maturity far beyond her age. Praying for her momentarily, Joshua then smiled broadly. Turning to the congregation, he spoke authoritatively. “Favour is not a witch.” The crowd erupted, many unable to withhold their tears. The burden of a stigma too heavy for such young shoulders was finally lifted.

The following Sunday 30th August, Favour's family recounted the sordid experience, thanking God for unveiling the truth. Leading the entire congregation in prayer on their knees for forgiveness for the heinous sin of calling one created in the image of God an image of satan, it was a time of sober and sombre reflection. The viewers watching worldwide on Emmanuel TV were touched by Favour's harrowing experience, many calling throughout the service and pledging to financially sponsor Favour to any educational level she desired. TB Joshua explained the gift of God in Favour is what prompted satan's attack, saying however that the experience served a purpose. “If gold must be gold, it must pass through the furnace,” he said, stating that Favour was a promised child with great potential. He said he would be ready to join the plethora of callers in sponsoring Favour to study abroad if she so desired, stating that she deserved the best.

A visibly thankful Favour testified in the church, drawing applause from the crowd for her prodigious intelligence. “I know that everything that happened to me serves a purpose. God is the One that brought us here. I thank God for making the whole world to know I am not a witch, and I have forgiven all those who accused me. I advise the whole world – if they call you a witch, just accept it - one day God will meet you and reveal the truth.” Africa News gathered that since then, Favour is being taken care of within The SCOAN premises.

In a similar event, a 10 year old boy named Victor Ivuogbe was abandoned at The Synagogue, Church Of All Nations by his father following related allegations of witchcraft. Sleeping under a truck and begging for food for four days before being found, TB Joshua had earlier made a plea for his father to come and reconcile with the boy, emphasising that he was not a wizard as accused. Responding, the father, a pastor in the Assemblies of God church, came to The SCOAN, and publically reunited with his son, acknowledging his mistaken accusation. “If we make mistakes, as we all do – don't run from God, run to Him,” said TB Joshua, encouraging the sober father. Charitable gifts of N800 000 and multiple bags of rice were also given out to widows and less privileged students in the action packed service.

The trend of children falsely accused of witchcraft and subsequently rejected and neglected is on an alarming increase within Nigeria, and indeed in different parts of Africa, people blindly looking for scapegoats when faced with crises of varying sorts. The issue recently attracted international outrage with the airing of a documentary on United Kingdom's Channel 4 where a self-professed pastor from Akwa-Ibom State claimed to have killed over a hundred child-witches. Stepping Stones Nigeria, a UK based NGO set up to awaken awareness of the Nigerian child witches dilemma, identified religious profiteering, extreme poverty, disintegration of the extended family structure, ignorance, superstitious beliefs and broken marriages as the major causes of such irrational accusations.

In a nation where many religious leaders are shameless exploiting these superstitious beliefs for personal gain and fame, Pastor T.B. Joshua has carved a niche for himself in the areas of revelation and reconciliation. Families torn apart through such allegations of witchcraft are re-united on almost a weekly basis at The Synagogue, Church Of All Nations as the truth from God is revealed regarding the said accusations. Many are financially supported thereafter on the road to rehabilitation and teams dispatched to the areas concerned to correct the wrong impression imposed on the accused.