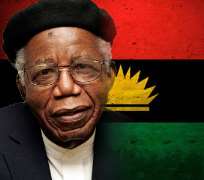 For forty something years Chinua Achebe’s 2012 book, There Was a Country: A Personal History of Biafra, remained in the works. It took him this long to write because the story is too personal and too painful to write. Biafra Genocide took place from 1966 against the Igbo and other Southeasterners (Biafrans); while the war started in 1967 and ended in 1970. Achebe finished writing about it in 2012, forty two years after the war ended or forty six years since the 1966 genocide.

The story is compacted into 334 pages. And through the author’s mastery the story is easy and gripping to read. It’s easy to read because the writer’s style is lucid and without any hint of guiles. But difficult because of the pain and missed opportunities the author and his loved ones had to and still go through. Since it is a personal narrative the writer would not bog the reader down with too many details. That, in itself, is one source of the pain of the writer.

What would he include and what would be excluded and still satisfy his conscience? So many incidents and details which are equally important crowd the author’s memory. To keep the sage from being overwhelmed, he must suspend the writing for another day.... This is how the writing got delayed for more than forty years. But finally the story is written and the world is richer as a result. And a grateful world salutes Achebe’s courage.

Biafra story is one of the most painful of all stories in history and to write from the inside is even more excruciating. Children, women and men were deliberately starved to death by the deliberate, vicious actions of federal government of Nigeria under the direction of Yakubu Gowon and Obafemi Awolowo.

Television had just become popular among households around the world and Biafra became the first TV war and what the people saw was too heartbreaking and frightening and gave the world a rude prediction of what is to come if it would do nothing to change it. Skeleton-like children and others with distended stomachs and with questioning eyes held the gaze, discomfortingly, of a spectating world in the comfort of their living quarters. The children and their parents were dying in Biafra from Harold Wilson’s Disease or kwashiorkor.

Achebe’s There was a Country is one of those very necessary stories ever written. Achebe and the rest of his gallant fellow compatriots worked tirelessly to establish his Biafran country. He played a pivotal part in that country and those of us who benefit directly from those sacrifices are forever grateful. Because of great minds, men and women of sterling character whose sinews seemed to be made of steel, Achebe’s country of Biafra worked in the face of daunting challenges and pain. But then a temporary wedge was put on the path of Achebe’s country’s march to true greatness by the combined forces of Nigeria, Great Britain, Russia (former USSR), Egypt and the Arab League. The wedge serves to delay and prolong the wistfulness of Citizen Achebe but eventually his country that was, and will still be.

Partly, Achebe waited so long to write his memoir because he was waiting for Nigeria. After the defeat of Biafra Achebe wanted Nigeria to succeed and so he waited and waited. Forty two years after he would not wait no more. Nigeria is hopeless. As soon as Achebe wrote the last word of his memoir, the last death nail was driven into the heart of Nigerian country. On that day Achebe finally carried out the last wishes of his friend and fellow citizen of Biafra, Christopher Ifekandu Okigbo. Okigbo had specifically requested in one of his poems that Achebe and others should wake him up near the sacrificial altar when the various fragments and aspects of unjust wounds inflicted on him and his fellow Biafran compatriots by Nigeria’s hatred and intolerance are counted and stitched together so that collectively the beautiful and unassailable Biafra poem would be finished. With the public showing of Achebe’s personal narrative of the Biafran story, the stars have aligned and the last rituals for Okigbo’s and the other heroes of Biafra’s final passage to glory begin.

On few occasions Achebe stated that the trouble with Nigeria is mostly bad leadership. Achebe is one of the brightest minds and greatest thinkers of the 20th and 21st centuries. Achebe lived through Nigeria, Biafra and then Nigeria and knows the truth. Achebe is bold and tough as nail but on those occasions Achebe the infallible god inadvertently massaged the ego of the Nigerian country by trying to be politically correct as mere mortals do. But Achebe has transcended the elemental foibles of mere mortals. Achebe since had ascended that realm in his native Igbo culture, where after someone has washed his tongue, he cannot lie. So in his usually clear and mesmerizing language as he told his personal story in his book, There Was a Country he redeemed himself. Achebe knows the truth which is that the real trouble with Nigeria is because it is a badly structured country. The trouble with Nigeria is the terrible incongruent cultural mixture of peoples without common interests and aspiration. Achebe knows that his Biafran country succeeded not because of the type of leadership for Nigeria that he spoke about on those occasions. Achebe’s Biafra succeeded because of the structural make up of that country which in turn produced the excellent leadership that Achebe and his fellow Biafrans witnessed and participated in.

When we talk about how to build a successful country we are thankfully not subjected to the difficult dilemma of trying to prove if the egg came before the chicken or the chicken before the egg. In a succeeding country, a good structure most of the time gives birth to good leadership. A bad structure or system has always produced bad leadership. This is the trouble with Nigeria.

Achebe’s Biafra did not need five hundred years to succeed as many Nigerianists have always argued that what is needed for Nigeria to work is time. One year was enough for Achebe and the rest of his people to make Biafra work. There was no need and luxury of time for them to wait. Achebe’s Biafra either worked or did not work in a space of one year. In Achebe’s Biafra they had a common aspiration and dreamed together. But in Nigeria there are too many dreams and everyone is dreaming to the exclusion of their neighbor. So, Achebe’s Biafra remains the only alternative that will still be.


Herbert Ekwe-Ekwe in his blog, www.rethinkingafrica.com calls Obafemi Awolowo’s edifices “a fast crumbling edifice” in his answer to the irrational Awoist critics of Achebe’s recent memoir. Obafemi Awolowo left behind an enormous and tremendous edifice. Awolowo was a great Nigerian who gave the country the best he got. Because of Awolowo’s gallant efforts and those of others like Yakubu Gowon Nigeria survived the first threat by Biafra to divide it. Partly thanks to Awolowo, Nigeria still stands today as a united country. On the whole Awolowo built up huge personal and national edifices but Ekwe-Ekwe describes those intimidating edifices as fast crumbling in the space of very little time, why? Many critical analysts of Awolowo and Nigeria have concluded that this is so because Awolowo’s and Nigeria’s edifices were built on falsehood and genocides and they cannot stand, as a result. Nigeria is already a collapsed house of cards and the debris will need to be cleaned out to enable the new Achebe’s country to be.

Biafra was a republic; a democratic country. Decisions were taken collectively. Even the decision to declare the country as free and independent from Nigeria was taken after so many consultations and the unanimous agreement by all the provinces that were in the old Eastern Region. This is why Emeka Ojukwu the then head of state of Biafra is never synonymous with Biafra. Biafra was the entire people of Eastern Region and Ojukwu was just an individual who played creditably his own part. The people that ran Biafra were the best minds and Achebe is preeminent among them. In the midst of fire and great tribulations they created Biafra and made it work. This is why Nigeria’s failure pains Achebe especially. In Achebe’s heart of hearts he knows that Nigeria would have worked if. . .

Yes, there was a country and will still be the Biafran country. As always Achebe wrote honestly and sincerely and wrote only facts and truth. But would there be no detractors just because Achebe belongs in the category of great men and women of character and integrity of all time? That will be unrealistic to contemplate. Detractors who envy and with passion attack Achebe viciously for his audacity to choose freedom and independence over slavery, human indignity and crime against humanity as visited on him and his people, abound. They are many that attack without countering the facts of Achebe’s testaments on Obafemi Awolowo’s, Anthony Enahoro’s, Yakubu Gowon’s and Britain’s Harold Wilson’s genocidal devastations of Biafra. Like court jesters the attackers risk self-ridicule in the face of incontestable facts. But what difference does that make, anyway? Achebe was in the Biafra of the 1960s and sacrificially dodged bullets and endured the hunger for a better tomorrow for the next generation of his people. Achebe in horror witnessed and endured the pain of losing two Achebes, friends like Okigbo and a host of others to Nigeria’s extreme hatred, intolerance and genocide.

Though very painful but Achebe and others never regretted those sacrifices; they gave their lives for the generation of Achebe’s children and those after them. For Biafrans of Achebe’s era no sacrifice was too much.

Some of Achebe’s Nigerian critics have called him a Biafran in Nigerian cloak. How apt and true. No one that experienced Achebe’s Biafra, even for a day, ever renounced their citizenship of that country. In fact, every one of Achebe’s people ceased from being Nigerians and renounced their citizenship of Nigeria forever, since May 30, 1967. The late poet and dramatist Esiaba Irobi said it even better when he described himself as a Biafran citizen on exile in Nigeria.

Achebe has been through very hot crucibles defending and working his Biafran country. Even if they were throwing flames, Achebe will not be bothered with the present puny egg-throwers in their desperate attempt to soil his sparkling image. Achebe’s position as the eagle on the peak of the tallest iroko around is secured and Lilliputians at the foot of the tree can try every antic in their bag of tricks.

The bottom line is: For Achebe and the rest of his people, they know that there was genocide and there was a Biafran country. Achebe is the most credible narrator and he has clearly and emphatically said that, in part, because there was genocide then his people were compelled to work towards establishing their own country from 1967.

Now, to the consternation of Achebe’s critics the world finally accepts, from the testimony of a most dependable witness, that there was genocide in Biafra and there was a Biafran country. That is the first step. The next one is to call the perpetrators of Achebe’s people killers to the tribunal so that the world, our world can be made safer through the execution of remedial justice and the process of collective global accountability. That has been done before.