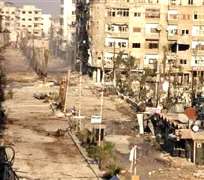 Elite Syrian government troops backed by tanks battled on Monday to recapture a strategic Damascus suburb from rebels who have advanced within striking distance of the center of Syria's capital.

Five people, including a child, died from army rocket fire that hit the Daraya suburb during the fighting, opposition activists said. Daraya is part of a semi-circle of Sunni Muslim suburbs south of the capital that have been at the forefront of the 21-month-old revolt against President Bashar al-Assad.

"This is the biggest attack on Daraya in two months. An armored column is trying to advance but it is being held (back) by the Free Syrian Army," said Abu Kinan, an opposition activist in the area, referring to a rebel group.

Clashes were also reported near the airport in Aleppo, Syria's largest city, which is in the north. Insurgents have made that airport a target in the hope of limiting government access to Aleppo, which is largely under rebel control.

Rebels have taken much of the north and east of Syria over the past six months, but government forces still hold most of the densely populated southwest around the capital, the main north-south highway and the Mediterranean coast.

Government forces scored a victory on Saturday, pushing rebels out of Deir Baalbeh, a district in Homs, an important central city that straddles the highway linking Damascus with the north and the Mediterranean.

Some opposition activists have said scores or even hundreds of people were executed in Deir Baalbeh by troops that seized it after several days of fighting. However, reports of killings there on a large scale could not be verified.

More than 45,000 people are estimated to have been killed in the 21-month war, the longest and deadliest of the revolts that began throughout the Arab world two years ago. Mainly Sunni Muslim rebels are fighting to topple Assad, a member of the Alawite minority sect whose family has ruled Syria since his father seized power 42 years ago in a coup.

The opposition refuses to hold peace talks unless Assad relinquishes power, and military successes over the last six months have reinforced its belief it can drive him out by force.

However, government troops still heavily outgun the fighters and maintain air bases scattered across the country.

The Damascus suburbs have become one of the major fronts of the war, with the rebels hoping to finally bring their uprising to the capital, heart of Assad's power.

Activist Abu Kinan said that tens of thousands of civilians had fled Daraya during weeks of government assault on the suburb, but that 5,000 remained, along with hundreds of rebels. Daraya is located near the main southern highway connecting Damascus to the Jordanian border 85 km (50 miles) to the south.

Activists said Republican Guard forces are trying to push back rebels who have been slowly advancing from the outskirts of Damascus to within striking distance of government targets and central districts inhabited by Assad's Alawite minority sect.

Assad's forces have mostly relied on aerial and artillery bombardment, rather than infantry. Rebels have been able take outlying towns and have clashed with government troops near Damascus International Airport, halting flights by foreign airlines.

Another activist in Damascus with links to rebels, who did not want to be named, said Daraya has been a firing position for rebels using mortars and homemade rockets. From it, they have been able to hit a huge presidential complex located on a hilltop overlooking Damascus and target pro-Assad shabbiha militia in an Alawite enclave nearby known as Mezze 86.

"So far they have missed the palace but they are getting better. I think the regime has realized that it no longer can afford to have such a threat so close by, but it has failed to overrun Daraya before," he said.

"HELL OR THE POLITICAL PROCESS"
The opposition is backed by most Western and Arab states, while Assad has enjoyed the diplomatic protection of Moscow, which sells arms to his government and maintains a naval base in one of his ports.

Western countries have been searching for signs that Moscow is lifting its protection of Assad, hoping that would bring him down much as Russia's withdrawal of support heralded the fall of Serbian leader Slobodan Milosevic 12 years ago.

Moscow said on Saturday that it has no power to make Assad leave office, and accused the rebels of prolonging the bloodshed by refusing to negotiate with him.

U.N. envoy Lakhdar Brahimi has called on outside powers to push all sides to talk, arguing that Syria faces a choice of "hell or the political process".

Brahimi is touting a peace plan agreed to in principle by international powers six months ago, but the plan does not explicitly call for Assad to be excluded from power, which the opposition regards as a precondition to any talks.

He said no flights were departing or arriving from the airport. Syria's state airline canceled at least one flight there over the weekend.

Nevertheless, the government's seizure of Deir Baalbeh in Homs is a reminder that its forces are still capable of recapturing territory from the lightly armed rebels. Syria's state news agency SANA said government forces seized a large cache of weapons and ammunition after capturing the district.