AMERICAN GUN PLAY AND THE CULTURE OF VIOLENCE 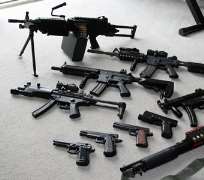 Every weekend in the United States some American parents and grandparents from urban, rural, and suburban areas take their children and grandchildren out for various family bonding activities such as ice skating, bowling, roller skating, movies, and video gaming to mention a few. These events are so enriching and popular that generation of Americans, immigrants, and visitors have followed suit. Some of these activities like the movies are guided by certain stipulations such as rating regulations. For examples young children and teenagers are not allowed to view certain motion pictures. In places such as bowling parlors there are age appropriate balls to enable each consumer to develop mastery on how to strike their pins. Most of these places rent out bowling shoes and skating shoes so that there is not an avalanche of purchasing these equipment while the kids are in their developmental stages.


These social avenues and vehicles of affections among descendants and friends in the US are not unlike the gun clubs and shooting ranges that offer fun- like junior programs and public traps activities. These entertainment and social clubbing networks are as American as apple pie when compared with the other forms of community and cultural comradery listed above. Hence, very young children are initiated into our predominant culture that strikes the balance between gun play and the culture of violence. As a result the infatuation with guns and violence is nurtured to conform to the archaic rights to bear arms against a government with nuclear weapons. This interpretation/notion of the second amendment are as absurd as other held beliefs of the founding fathers such as blacks are not complete human beings and/or that women do not have the faculty to cast votes.


So instead of advocating common sense gun safety majors that would curtail our gun play and culture of violence that has transcended economic, ethnic, and religious prisms we are left with pseudo arguments that make no sense even to children the ages of the Newtown Connecticut victims. We blame mental disorders among others as the reasons for gun violence instead of our proclivity with guns while making sure that mental health and healthcare parity exist on paper only. But in our rush to label and stigmatize we fail to realize that there are no higher prevalence of mental health disorders in America when compared to other countries but indeed what we have more than any other country on earth within our different strata is the availability of guns and more cheap guns.


Some have lashed out on the issue of religion in the educational system as the vacuum in which these mass shootings occur. These hypocrites wobble in the belief that Americans are any less religious than Europeans, Asian, and any other people on earth. Jesus Christ and Christianity are put forward as the panacea for a self-fulfilling prophecy that encourages public policies that are rigged in corruption and blood to keep the gun industry afloat. Gun clubs and shooting ranges are allowed to certify National Rifle Association (NRA) programs in these clubs to advocate for mass ownership of guns without a thought for the victims that pile up when the safety and security of these guns are compromised. Due to the financial strings attached to the weaponry industrial complex, there are hardly voices that inspire gun rentals in clubs and ranges in place of massive gun ownership/consumption. Instead we become reactionary when preteens and adolescences murder themselves in Chicago like flies and when babies are slaughtered in cold-blood at Newtown and various American cities.


As Americans we are now in the crossroads of determining whether to become actually civilized or continue in our barbaric heritages of violence. How can we wake up in the morning and force our kids to get up to go to school and our society cannot protect them because of the archaic rights to bear arms? Where these advocates of the second amendment and their so-called militias blind when the Patriot Act passed that gave the government various powers that curtailed our individual liberties?

How long are we going to tolerate these senseless murders and think that racial profiling and stand your ground laws are viable solutions? During these periods of introspections we need to squarely address our culture of violence. This should include assessing our national and foreign policies as it relates to gun play and the culture of violence. Why do we manufacture and export more guns than any other country in the globe? We should remember the other angels in Pakistan, Congo, and elsewhere that die due to our illegal drone attacks and other weaponry as we cry and bury our six and seven year old angels.