TAPPING FROM THE TREE OF LIFE 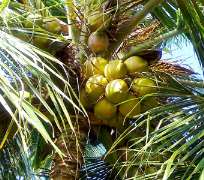 There is a well wind blowing across the United States and Europe that should do us much good. That is if we avail ourselves the opportunities it brings to our threshold. This wind interestingly provides us an antidote to our tight grip on crude oil. It has to do with the unexpected spike in the demand for coconut fruits in the West that has so far outstripped global supply.

Coconut water is now one of the fastest growing beverages in the United States and United Kingdom. This is not unconnected to its great taste, nutritional value and natural hydration qualities. There are currently 250 companies that have a beverage with coconut water content.

Reports reveal that in the US, coconut water in the drinks category is already worth over $350million while in the UK, it is projected to be worth £100million by 2014. New Nutrition Business in its 2012 report, disclosed that the number of coconut water beverage launched in Europe quintupled from seven to 36 brands between 2009 to 2011.

Back home in Nigeria, the demand for coconut has surpassed the production capacity for decades. While national consumption is on the increase, the production of coconut appears to be limited to the south-west with the local demand being hinged on its oil and nuts.

With growing population and coconuts mostly consumed in the northern part of the country, Nigeria has resorted to importing the fruit from neighbouring countries such as Benin, Togo and Ghana. At present, the Nigerian market absorbs over 50 per cent of coconuts got from Ghana.

One cannot but ponder on this craze that is steadily wearing on the world. In some cultures, the coconut tree is widely referred to as the tree of life. They see it as having an overwhelming versatility where each element of the tree is useful in some facet; be it the oil extracted from it acting as natural skin and hair moisturisers or the fruit being a great source of potassium higher than that of banana.

The foregoing provides a background into why coconut fruits are increasingly becoming the favourite overseas. Athletes and fitness fanatics are copiously downing coconut water for its high potassium and mineral content that promises fast, natural hydration.

Granted that coconut with its derivatives have become a highly sought-after commodity in the international market and it can be produced in Nigeria, there is only but one option available to Nigeria- she should as a necessity and urgency begin strategizing on means to adequately reap from this God's gift to humanity.

We can't continue singing about our desire to diversify from a mono-economy and not make the most of opportunities like this when they present themselves. Many like the former education minister, Oby Ezekwesili, have wished that our oil reserve dried up so that the country can become interested in other sectors. I don't see that as the stimuli we really need.

With this stupendous desire for coconut- which can be comfortably produced in Nigeria- government doesn't need another inducement to jolt her from the extreme reliance on oil. The high demand for coconut is enough for government to be distracted from crude oil by venturing into a new vista that will be greatly rewarding to the country.

In countries like Indonesia, the Philippines and Brazil, known as the world's largest producers of coconut, their governments sensed an economic opening in coconut and have since acted swiftly. They had initiated and are now implementing policies that would encourage and boost local production of the produce.

We can take a cue from them on this- after all Malaysia is today the world's largest producer of palm trees as a result of the lessons they took from us in the 70s. Nature has made it incumbent on us to grow coconuts by granting us the landtype and climatic condition that support its production. We should then not disappoint nature by not taking to the plough.

Since coconut grows well in some parts of the country like the south-west and other parts of the south, the federal government should make it a srategic crop where incentives will be splashed on farmers who go into coconut farming. It would be good for government to institute a board that will deal directly with these farmers by buying the fruits from them for onward export. This will reduce poverty and avoid the exploitation of the farmers by greedy middle-men.

It's been established that it's not for fancy that people of the West are steadily gulping coconut water, we as a people should not fail to do same given its benefits. Here, there still abound superstitions surrounding coconut water that have removed our people from adequately benefiting from this tree of life.

One of such superstitious belief is the myth that drinking coconut water causes running stomach. I guess if this was to be factual, nutritionists and athletes who favour it as a healthy alternative to glucose based sports and energy drinks wouldn't have been so favourably disposed to it.

The growing global demand for coconut fruits should get enterprising Nigerians thinking about how to come up with ways of better packaging and presenting any of its derivatives. We have the human and natural resources to make this happen hence we should.

Tapping into the tree of life in these ways will do us and our nation a world of good. Let us then kill the delay by getting at it.