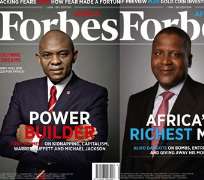 Dangote, Elumelu and the others were nominated by readers because of their impact on African business in the past year, a statement by Forbes Africa read.

“Aliko Dangote and Tony Elumelu are the only two Nigerians who made the final five. Dangote who is still Africa’s richest man with more than $11.2 billion was also nominated last year before the award was won by fellow country man and Governor, Central Bank of Nigeria, CBN, Sanusi Lamido Sanusi who did not make the final cut this year,” the magazine maintained.

The magazine said the Forbes Africa Person of the Year award would go to the individual who has had the most influence on events of the year gone by, adding that with the release of the final shortlist, voting has already begun on the magazine’s website and would close on Thursday, November 1, 2012, and the Forbes Africa Person of the Year would be revealed in an event scheduled to take place in Nigeria.