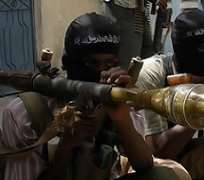 The attack forced residents of the commercial city indoors through Friday as the terrorists torched the local government headquarters complex, five primary schools and other properties in town around Sokol Junction.

Eyewitnesses told THEWILL that the fundamentalists carried out the attacks between 6pm and 9pm, using rocket launchers and other sophisticated weapons.

Several dead bodies were seen on the streets on Friday morning.

It was not clear at press time whether they were confronted by the military.