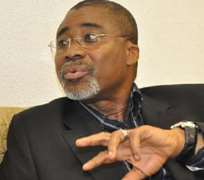 ABUJA, October 17, (THEWILL) - The Senate bared its fangs on Tuesday when it called on President Jonathan to caution his aides over inflammatory and disparaging comments against the National Assembly particularly on the budget. They advised that such aides are doing him a lot of disservice.

Recall that the Senior Special Assistant to the President on Public Affairs, Dr. Doyin Okupe and the Political Adviser to the President, Ahmed Gulak had at separate times bashed federal legislators over the way they are handling the 2013 budget presented by the president.

Speaking with newsmen after plenary, the Chairman of the Senate Committee on Information, Senator Enyinnaya Abaribe, while describing the aides as "lowly" cautioned that such vituperations are not in the interest of Nigerians.

Abaribe assured that the National Assembly is ever ready to have constructive debates on ways to move the nation forward rather than be distracted by "overzealous aides."

Abaribe said; "For the record we don't believe President Jonathan has sent them to make aspersions against the Senate and House of Representatives. Our belief is that they speak for themselves and they are not doing the president any good. Our belief is that each arm of government should work harmoniously and ensure that all is done in the interest of Nigerians. For those aides of the President who seek to foment problem, they are not serving the President well. We have very serious things to talk about than the vituperations of lowly officials of the President. These things are very important.

"We like the President to look inwards and determine whether they are serving him well. We desire to be on the same page with the Executive. Conflicts does not serve anybody good. We like to have a debate on what will serve Nigerians not on persons who become overzealous," he said.

However the Senate will today deliberate by way of a motion the remarks of Gulak who described members of the National Assembly as ignorant.

This was sequel to Senate order 42 raised by Deputy Senate Leader, Senator Abdul Ningi, calling the attention of the Senate to a publication in a newspaper where the adviser to the President had derided the legislators.

Ningi said, "I think it is injurious to the harmonious relationship between the executive and the National Assembly.

"Special Adviser of the president while reacting to views said that the National Assembly are ignorant. He went further to say ‘these lawmakers should pass implementable laws’.

"I raise this matter for the Senate to make it urgent because such dissemination of information will wreck the established relationship that this chamber is known for with the Executive and the National Assembly. I therefore crave the indulgence of the Senate to discuss this matter.

However, Senator Chris Ngige, who rose under order 14, bordering on issues that impinges on privileges of National Assembly members, maintained that the issue should be addressed immediately adding that "the matter be discussed right away".

The move however failed as the Senate President, David Mark maintained that the issue be robustly addressed today.